Diversity Of One is a Rock Band hailing from Sacramento, CA. Sacramento has a rich background of producing great musicians that have helped pave the way for other bands to bust onto the national music scene. This also made way for a unique band like Diversity Of One to grow wings and take flight. The amazing thing about this band is not only the name, but it’s members that makes the name Diversity Of One special too with our Drummer Joel “Joeliath” Slusser, Guitarist Mike “Assassin” Silva, Bassist Michael “BMC” Cooper, and Lead Singer Jemell “Jemezzy Ba’be” H. McGuire… Why the name Diversity Of One? Hmmm interesting right? Well please allow us a brief moment to explain…

Joeliath brings 20 plus years of experience in the music business. His knowledge alone is priceless. The fire and passion Joeliath plays with is on the thin line between genius and insane. With pure love and respect for the ones who showed him the way, they continue to inspired him to play the drums with so much grit. Joeliath plays with that in your face edgy Hardcore Metal–I’m going to murder every song style drumming. He’s a proud member that takes so much pride in destroying snares… Steaming from his background of playing Metal, Punk, Thrash HipHop, and Various Other Styles.

Assassin is the baby brother of the crew. He is not a stranger to the music scene. Assassin comes from a long family of shredders, from grandfather to uncle, and now the torch has been passed onto him. Assassin has put many years into the local circuit. He brings that bang your head till your neck get stiff style of guitar with face melting rifts and sneaky snake like scales that will blow your mind. When he hits the stage, you can see by the crazy look in his eye that he is a shredder. His style reflects his background which includes Death Metal, Rock, Hard Rock, Alternative HipHop.

BMC is the papa bear of the group. He has logged many years on the road starting when he was a teenager racing cars all throughout the U.S. and now our musical Doctor of the Bass. He administers that rumble you feel in your chest. He is a true student of the game of life. BMC is not afraid of the hard work and he constantly finds ways to become a better musician. His infectious and extreme work ethic, makes the people around him better. BMC’s background reflects his playing style: Hard Rock, Big Country Guy, 80’s Rock, Metal, Old School Low Rider Music, and HipHop.

Growing up in a family full of entertainers one might think that Jemezzy Ba’Be may have chosen a different path, like becoming a doctor or lawyer or even a police officer. Well that is not the case. After countless shows and thousands of hours on the road, sharing the stage with some the biggest HipHop legends, yes you guessed it, a musician. Growing up with music playing from sunup till sundown, planted the seed in a young boy that would become Jemezzy. He would have to follow in the huge footsteps left by his family tree of musicians. His grandfather always told him,

If something sounds good, IT’S NOT GOOD ENOUGH.

Perfection is key, so perfection is what Jemezzy always strives for. His background of music explains the wacky way he sees and writes music. Raised by his Grand Mommy on Blues, County, R&B, Pop, Dance Music, HipHop, Rhythmic Latin Music, and Reggae, just to name a few.

You may still ask what makes D-One so special? It’s our differences that does. You have four different individuals from four totally different backgrounds that love each other. Like being born and raised by the same parents, fighting for the same things. Brotherhood and equality while respecting each other and building a bridge where a dialogue can be established with no fear and no judgment. Understanding and accepting diversity is the key to make our world great. WE ALL ARE Diverse and WE ARE ALL One. We started as four people who met from by chance from the creation of song and now we are brothers for life. I DARE you not to like what we stand for. I DARE you to not like us as individuals. I DARE you to be free and be open minded to something so different.

Hit us up on social media 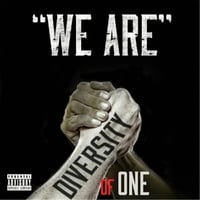